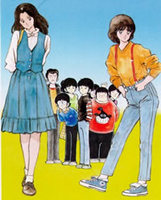 Miyuki Wakamatsu: A good morning kiss. Would you like one more?
Masato Wakamatsu: (lamenting it was just on the forehead) Idiot! This is Japan! Brothers and sisters here don't do that! Did you forget!?
Miyuki: I've been living overseas too long.
— Miyuki, Masato and Miyuki, after Masato wakes to a forehead kiss from Miyuki
Advertisement:

A manga from 1980-1984 by Mitsuru Adachi, Miyuki is the story about Masato Wakamatsu, and the romantic feelings he has for two girls, both of whom are named Miyuki. One is his classmate, Miyuki Kashima, and the other is Miyuki Wakamatsu, his sister who is not related by blood. It is very lighthearted, and was made into an anime in 1983, which was broadcast in some foreign countries including Italy, France, Spain and Uruguay.