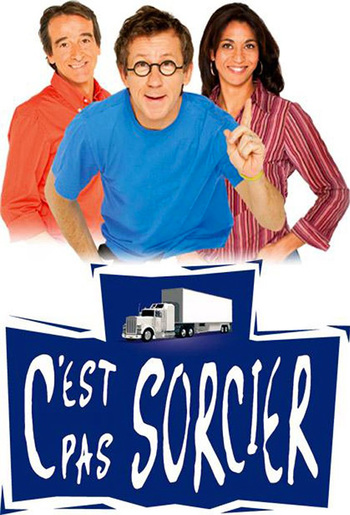 C'est pas sorcier ("It's no sorcery", an idiom that translates more accurately as "It's no rocket science") is a French Science Show that ran from 1993 to 2014 on the France 3 channel. It was hosted by Frédéric "Fred" Courant, Jamy Gourmaud and (since 1999) Sabine Quindou, and totalized 599 episodes. The show remains memorable to many French people who grew up with it and/or saw episodes in various science classes, especially for its surprisingly hard main theme

In the show, Fred and Sabine work together in the field. They travel around the world, interview specialists, and ask questions to Jamy who, in his laboratory situated at the back of a truck driven by a guy named Marcel (who's never seen), answers them using models and mock-ups. After 2011, Jamy travelled to symbolic locations relevant to the topic with a mobile laboratory equipped with touch screens, computer graphics and the models.

Since 2019, the show has a Spin-Off of sorts on the French video-on-demand platform Okoo, C'est toujours pas sorcier ("Still no sorcery"), with new hosts. Jamy has kept hosting various other smaller-scale science shows since.