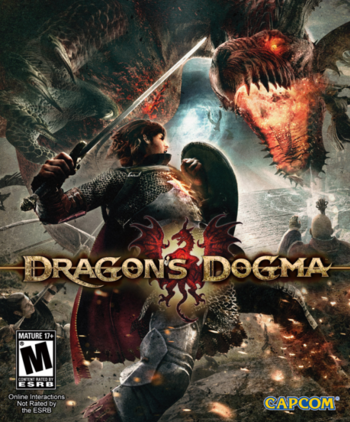 If you would face me, take up arms, Newly Arisen.
— The Dragon
Advertisement:

Dragon's Dogma is an open world action roleplaying game that was developed by Capcom Europe for the PlayStation 3 and Xbox 360. Directed by Hideaki Itsuno, known for his role with the Devil May Cry series, it was released in May 2012.

Set on the island duchy of Gransys, it begins with the sleepy fishing village of Cassardis coming under attack by a terrible dragon of legend. You take up arms to defend your hometown, only to be defeated and have your heart literally stolen from your body by the dragon. With your very life held in bondage, you are transformed into an Arisen: an ageless warrior who must seek out and slay the dragon if you wish to reclaim your humanity.

The game's primary focus is its reactive, Hack and Slash gameplay. The player is able to pick from one of nine Vocations that define their playstyle — from the Guts-emulating Warrior, to the typhoon-summoning Sorcerer, to the agile and precise Ranger. The nine Vocations are divided into three trees — magic, skill, and power, and three of the nine Vocations mix and match the Vocations into powerful specialist classes, such as combining Warrior and Sorcerer into the Mystic Knight. You can also perform a Colossus Climb on larger monsters, and much of the combat is based around exploiting everything from enemy weak spots like a Drake's glowing heart to inherent weaknesses like a Goblin's distaste for fire.

In addition, the game uses a Manual Leader, A.I. Party system where you can recruit up to three "Pawns" as your party members. You create one Pawn of your own near the start of the game as your primary traveling companion: you can customise the appearance, class and equipment of your personal Pawn just like the Player Character, and they level up alongside you. The other two Pawns are recruited from "The Rift" (read: the Internet) and belong to other players, though they do not level up and must be continually replaced. An interesting note is that Pawns retain the memories of which quests they have been on, so if you recruit a Pawn belonging to a player who has already completed your current quest, that Pawn can actually give you hints and directions based on their experiences.

An Updated Re-release, titled Dragon's Dogma: Dark Arisen, was released in April 2013 and added a lot of new content and re-balancing, most notably a new optional challenge dungeon called "Bitterblack Isle" (which takes more than a few cues from Dark Souls). A free-to-play MMORPG, Dragon's Dogma Online, was released in 2015 in Japan and was available to play until its shutdown in December 2019.

A PC version of Dark Arisen was released on Steam on January 15, 2016. It features technical improvements such as higher resolutions and an increased frame-rate (to 144FPS). A version with revamped graphics for PlayStation 4 and Xbox One was released in October 2017. A version for the Nintendo Switch was released on April 24th, 2019.

, Netflix announced that an anime series based on the game would be released for the streaming service. The anime adaptation of Dragon's Dogma was released on September 17th, 2020.

A sequel, titled Dragon's Dogma II, was announced to be under development on June 16th, 2022.