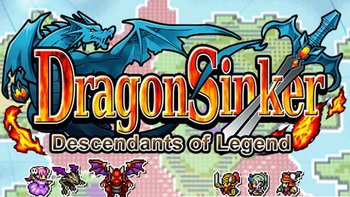 Dragon Sinker is an Role-Playing Game developed by Exe Create Inc. and published by KEMCO. With a visual and audio effects of a nostalgic 8-bit era games, you fight an evil dragon with the combined forces of humans, elves and dwarfs. Travel the world, mix-and-match jobs and their skills as you recruit more people and find the legendary weapons that will put the dragon in its place!

1,000 years ago, a dragon named Wyrmvarg terrorized the world. Three heroes, a human, an elf and a dwarf, put an end to his reign, by sealing him deep in the Earth. In the present day, Wyrmvarg is freed from his sealed and has been appeased by the human through their sacrifices. A descendant of the hero, Sir Abram, challenges Wyrmvarg to a fight, but to no avail. As consulted by the Head Priest, he then embarks on a journey to find legendary weapons wield by the heroes, while uniting with the elves and the dwarfs back from their disputes along the way.