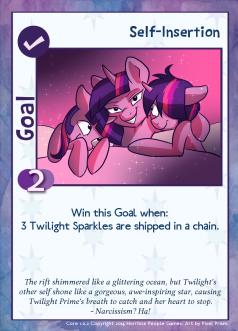 Shipper on Deck? Nope, she's the freaking admiral.
"Shipping is what happens when I decide two ponies love each other very much."
Advertisement:

is a tongue in cheek tile/card game that pokes fun at Shipping in general and My Little Pony: Friendship Is Magic Shipping specifically. The premise is simple: Twilight Sparkle is secretly an avid shipper of everypony (and non-pony) she meets. It's up to you to help her write her ships to her satisfaction; you do this by expanding the Shipping Grid, comprised of ponies linked by ships, and completing shipping goals before any of your opponents can. The winner (or, perhaps, shameful loser), is the one that can reach a pre-set number of points first.

Developed by Horrible People Productions, TSSSF not only references almost every shipping trope in the book, but also a number of fanfic and soap opera tropes (with a little time travel thrown in to spice the flavor). Half the fun is plotting your plays strategically in order to block other players and earn goals yourself; the other half is cracking up at the Flavor Text and the unusual situations that the shipping grid can portray at any time.

A campaign has been launched

on Indiegogo to get the game a booth at BronyCon and print official card decks. There is also a patreon

Unfortunately, due to personal reasons, Horrible People Productions has dissolved as a company, so there will be no more "official" content for the game past the card sold during their inventory liquidation sale ("All Good Things Must Come To An End"), though as always the fans are more than welcomed by the company to continue making cards and expansions. All cards (including the unfinished ones) can be downloaded from their website