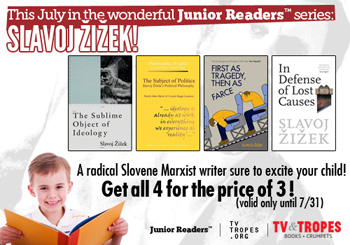 They make great bedtime stories!note ...What? Just because your child is simple doesn't mean we have to dumb down education. Besides, any book is a children's book if the kid can read!
"Hey, kids! Which horribly disfigured sociopath is your favorite? Get all three, and you get a free straitjacket."
— Iron Man (sniping Batman on how he claimed that The Dark Knight is for kids), I'm a Marvel... and I'm a DC.

Executives are a superstitious, cowardly lot. They're always worrying about their "next big thing" gaining lots and lots of fans. And so when it comes to marketing and tie-in merchandise, they'll try to cast as wide a net as possible to attract a wide variety of people.

This often results in Misaimed Marketing. It's when a work of fiction is promoted in a way that seems... odd to people who are already familiar with it. This most often takes the form of extremely deceptive advertising or bizarre tie-in products.

Toys based on R-rated films are common; such action figures are sometimes aimed at least partially at adults, but are also often found sold in mainstream toy stores. Some companies go even further, creating products directed at kids for those same movies. It's a tad creepy when either toys or Saturday Morning Cartoons of movies that have graphic sexual and/or violent content are sold to kids. (Why, yes, your kids would love a Starship Troopers action figure...). It may also be because executives know that a Periphery Demographic exists among kids who watch shows meant for older audiences.

Fortunately, retailers are starting to get wise to this and such items are often found only in specialty stores now. And keep in mind, just about every apparently misaimed retailer action will end up being justified if it makes money. There are no exceptions to this.

Compare Unisex Series, Gendered Merchandise. Contrast Merchandise-Driven, where marketing may have been the point all along. Tends to happen when you've got yourself a Cash Cow Franchise. Usually happens because the people in charge Didn't Think This Through. Very often leads to What Do You Mean, It's Not for Kids? If the marketing does not gel well with the work's moral message, this can crash into Undermined by Reality. See also Never Trust a Trailer, Covers Always Lie, and Contemptible Cover. Sometimes runs headlong into My Little Panzer...

"How Toyetic Can you Get?"

Parodies of This Phenomenon