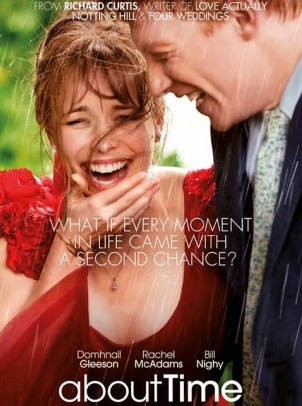 About Time is a British romantic comedy science fiction film revolving around time travel. Written and directed by Richard Curtis, the film stars Domhnall Gleeson, Rachel McAdams, and Bill Nighy. The film was released in Britain and Ireland on September 3, 2013, and was released in the United States on November 1, 2013.

Tim Lake finds out from his father when he's 21 that every male in his family has the ability to travel in time. At first, the awkward Tim uses it to improve his life and impress the girl of his dreams, Mary. But when he accidentally erases part of his timeline, he learns about the ramifications causality can have on his life.

Not to be confused with 2011's In Time, also science fiction but without time travel.