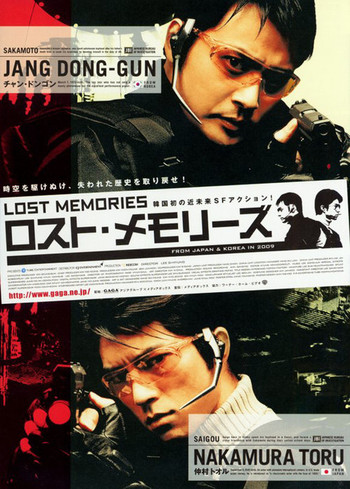 in 1909 was averted, leading to Japan allied to the US in World War II and therefore retaining its colonial empire in the Asia-Pacific region, including Korea.

Sakamoto (Jang Dong-gun), a Japanese Bureau of Investigation (JBI) agent of Korean heritage and Saigo, his Japanese partner try to solve a strange case where Pro-Korean nationalist "terrorists" attempt to steal a strange archaeological artifact. Initially Sakamoto is valuable to the case because of his ability to communicate with the terrorists. He is later removed from the case when it is discovered that his father had some previous involvement with the terrorist group. Sakamoto's desire to solve the mystery involves threatening the powerful Inoue Foundation. This only makes him more passionate about its resolution and after uncovering more on his own, he discovers that reality isn't how it should be. It then becomes his new mission to restore history to its rightful path.

It has a limited release overseas as seen in Asia and in North America, most of them having official English subtitles and dubs, depending on the country/territory where you purchase the movie.

It was adapted from In Search of the Epitaph, by Bok Geo-il, which has similiar settings, but has way more drama then this.

Essentially Fatherland with an Asian slant.

Contains examples for the following tropes: