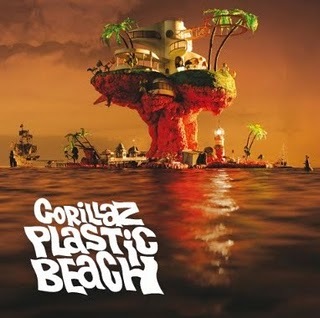 "It's all good news now, because we've left the taps running for a hundred years..."
Advertisement:

Plastic Beach is the third album by Gorillaz, released in 2010. It marks Phase 3 of the band's history.

Originally a non-Gorillaz project known as Carousel, the final product evolved into a Gorillaz Concept Album inspired by plastic trash and pollution in the ocean. As per the Gorillaz trademark it is a New Sound Album, this time with more of a pop influence alongside the usual Genre Roulette.

In-universe, after Kong Studios burnt down at the end of the previous phase, Murdoc took up residence in Point Nemo, the titular Plastic Beach. He had 2D kidnapped to provide vocals for the new album, and replaced Noodle with a cyborg clone after her presumed death. He's also being pursued by a group of pirates known as the Black Clouds, and an evil entity called the Boogieman wants his soul. Unbeknownst to Murdoc, however, Noodle is actually alive; she'd been dragged to Hell by demons and managed to escape. Reuniting with a now-gigantic Russel, they head for Plastic Beach...

While the album itself was released to critical and commercial success, the period shortly thereafter proved to be a tumultuous one for Gorillaz as a whole. While Phase 3 was built up as being the project's most ambitious arc, it was abruptly Cut Short, most often attributed to a combination of a ballooning budget, Creative Differences between Damon Albarn and Jamie Hewlett, and a lack of faith from their label. As a result, the story was left incomplete, and following a larger collaborative spat between creators, the album was the last major Gorillaz album (aside from a modest release of The Fall the following year) before the group took a long hiatus, not reuniting until 2017 and the release of Humanz.

Preceded by Demon Days. Followed by The Fall.

Welcome to the World of the Plastic Tropes: