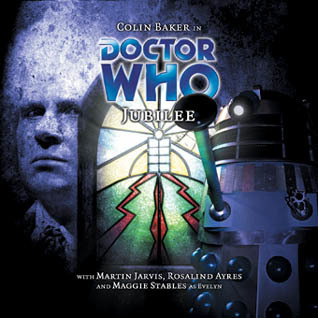 The Doctor and the Lone Dalek
Advertisement:

"Jubilee" was loosely adapted into the TV episode "Dalek" by its author, Robert Shearman. The surnames of two of the actors here, Jane Goddard and Kai Simmons, would show up as characters in that episode too. It's also considered possibly the best episode Robert Shearman, and Colin Baker, ever did.

The Sixth Doctor and Evelyn arrive in the Tower of London (again) in 2003. Evelyn notices that the Tower is exceptionally dusty, and before she can investigate, the TARDIS vworps off in terror. The Doctor, meanwhile, has a sudden attack of Flash Sideways and starts clinging to Evelyn as though he hadn't seen her for a century.

England, meanwhile, is the political center of a powerful empire, and its Presidents have ruled the world since the great Dalek war of 1903. Dalek imagery is everywhere: on coffee cups, toys, t-shirt, in movies, songs, on toothpaste. Just as iconic as the Daleks is the imagery of the dashing Doctor and his Love Interest, Evelyn "Hot Lips" Smythe, who vanquished the Daleks during the war.

The Doctor tries to protest, and becomes the guest of President Nigel Rochester and his air-headed wife Miriam. Rochester is a ruthless dictator who spends his time assassinating people, insulting and hitting his wife, making weird and draconian laws, and fashioning little people into makeshift Dalek-shaped slaves for his entertainment. He also has one Dalek left to play with: the last survivor of the war, captured when its self-destruct function was disabled. Every once in awhile, it's shown to the people for motivational purposes. While it's held captive in its crippled state, it's tortured, interrogated, and occasionally boiled a bit to make delicious Dalek pus juice. And to celebrate the 100th anniversary, it'll be assassinated. Confronted with the Doctor, the Dalek speaks for the first time in decades, and the Doctor is absolutely horrified by its torment. But a Dalek is a Dalek, and the Doctor's main priority is to get the timeline back on track. Because he sort of remembers fighting in that Dalek war, and — perhaps most terrifyingly — he doesn't remember escaping from it...

While Rochester takes the Doctor for a tour of his Crapsack World, Miriam reveals to Evelyn that she's not dumb at all. But she's been raised to be docile and self-loathing, as is every other woman in the world. She takes Evelyn along to see the mysterious captive of the empire... the old man in the wheelchair... the one who, you could almost say, created the Daleks. The trip leads Evelyn to the Tower of London (as usual), where she finds... the Doctor, who's been held captive there for 100 years. After Evelyn passed away of old age, he lost his mind, and when they took her bones away from him, his constant escape attempts eventually cost him his legs as well. And now he's incapable of recognizing Evelyn.

Rochester, meanwhile, confides in the present-day Doctor that he's not really evil. He's just a raving paranoid, terrified of Dalek spies. And that's why he has to be a heartless dictator to the entire world, including to Miriam. The Doctor tries to explain that there are no Dalek spies, but Rochester is convinced that there must be; otherwise why does everybody act so evil all the time?

Evelyn and Miriam plan to stage a daring revolution using the — very broken and very traumatized — Dalek. Evelyn immediately regrets this decision when it turns out that Miriam is batshit insane and actually believes wholesale in the regime's views, especially the misogynistic ones. The Dalek, now given back its gun, confronts the old Doctor in the Tower, reasoning that, as the conqueror of the Dalek race, he is its new commander and it asks him for new orders. The old Doctor bitterly laughs at the notion and tries to shoo the Dalek away, but this only prompts it to start begging him to give it some orders; any orders. The old Doctor, tired and broken, resignedly asks the Dalek to kill him, to which it complies, which makes the present-Doctor's flashes of the past intensify. He realizes that his presence in both time zones simultaneously is causing them to merge, and valiantly tries to keep this from happening through the power of his will. The Dalek is brought to the Jubilee celebration alongside Evelyn, the only creature left in the universe it feels any respect for, where they meet Rochester and the Doctor.

At the president's invitation, the Doctor gives a grand speech to the population to explain that they can't blame the cultural memory of the Daleks for their misery — they are exactly like the Daleks, and they exemplify how a society collapses in on itself when given absolute power. Miriam, in a fit of frothing insanity, takes this opportunity to deposes her husband and decides that the Dalek would make a fine ruler and asks to become his wife. At this point, the Doctor's tremendous will fails, and 2003 and 1903 merge, causing the Dalek invasion fleet to materialize at the Jubilee celebrations. The Lone Dalek, driven even more insane by experiencing Evelyn's kindness and convinced that the only way to prevent absolute power breeding corruption is to never attain absolute power, exterminates the Supreme Dalek and seizes control of the Dalek command circuits. He orders every Dalek on Earth to self-destruct for the glory of the Dalek race, then piteously begs Evelyn to kill him, which she regretfully does. The destruction of the invasion fleet in 2003 before the invasion has a chance to take hold in 1903 causes reality to snap back to the way it should be.

The Doctor and Evelyn comes to inside the Tower, which has gone back to its normal tourist-filled self. They then hear panicked screams from one of the tourists; it turns out that the normal timeline's version of Miriam, and she freaking out over how her beloved husband, Nigel, is suffering from a sudden heart attack. The Doctor manages to resuscitate Rochester, who recognizes as him as he wakes up, calling him "the saviour to us all". As paramedics turns up to help Rochester, he meekly tells the Doctor that all he ever wanted to was to be a good man, and he wonders if that will easier now. The Doctor tells him that it will have to be his own decision. Rochester thanks him and ensures him that he won't forget him, while Miriam also showers him with gratitude for saving her husband's life.

The Doctor, somewhat disturbed that Rochester still recognized him despite the fact the altered timeline never actually happened, tells Evelyn that he wants nothing more than to just get away from the Tower and London for the time being. Later, inside the TARDIS, Evelyn complains to the Doctor that she has trouble sleeping as every time she attempts to, she dreams of the Evelyn from 1903, and how she died, as if it actually happened to herself, and the Doctor tells her that he is having the same problem too. Evelyn wonders how it is possible, seeing how everything was put back to normal in the end, and the Doctor tells her a hundred years of humanity living out the worst, most depraved sides of themselves, and all the accumulated hatred and fear resulting from it, is not going to go way that easily, but will probably linger as a shadow in peoples' mind for some time, but only as the occasional dream and strange deja vus, which will be dismissed as pure fantasy by the ones experiencing them, as most will not think themselves capable of the cruel acts did in the other timeline, but he and Evelyn will know better. "The Daleks might be gone, but the evil men do will echo on forever," concludes the Doctor. Worried, Evelyn asks him if it can ever be as bad as what they saw in the other timeline. The Doctor says that maybe, if people are willing to confront the shadows in their minds and learn from the darker sides of history, things won't ever be that bad again.