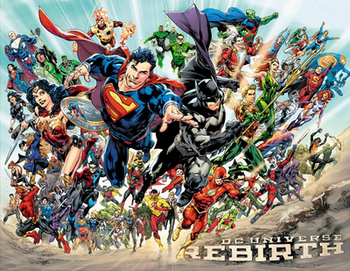 It's not a reboot, and it never was.
"I love this world...but there's something missing."
— Wally West
Advertisement:

DC Rebirth is the 2016 relaunch of DC Comics, and their first major rebranding since the New 52 began in 2011. Unlike the latter, DC Rebirth isn't a Continuity Reboot of the DC Universe; it's more akin to Marvel's contemporary line-wide relaunches of late, with notable status quo shifts and new creative teams taking over certain titles, as well as some books being renumbered and others getting new #1s. However, there are notable retcons that move the universe closer to how it was before The New 52.

DC Rebirth is a product of The New 52's dissolution in 2015, which gave way to another (short-lived) initiative called DC You. While some of the creative decisions made during the DC YOU era were acclaimed by critics and readers, it hadn't boosted sales; in fact, DC's overall comic figures dropped to what they were before The New 52 launched. Because of this, they decided something had to be done to reignite interest in their books.

Geoff Johns —who was personally responsible for the "rebirths" of Green Lantern and The Flash a decade or so earlier— is at the helm of this ambitious project, citing an emphasis on "legacy" and doubling down on what readers have always loved about DC Comics. Additionally, a one-shot called DC Universe: Rebirth (penned by Johns himself) was published, laying the groundwork for the rest of the new line.

See Young Animal for another series of new book launches designed to bring in new readers, this time harkening back to early '90s Vertigo Comics. See The Wild Storm for yet another relaunch: Warren Ellis' reboot of the universe formerly owned by WildStorm Productions.

Marvel Comics a year later announced its own version, Marvel Legacy, with a Fall 2017 launch. Though that didn't work as well as expected. They made a second attempt in May 2018 with Marvel: A Fresh Start, which was much more successful in comparison.

At New York Comic-Con 2017, it was confirmed that the branding would be removed come January 2018, though the main plot will conclude a fair bit later. It would later be followed by the Infinite Frontier rebranding initiative in March 2020, following the Future State event.

I did the right thing, didn't I? It all worked out in the end.
"In the end?" Nothing ends, Adrian. Nothing ever ends.