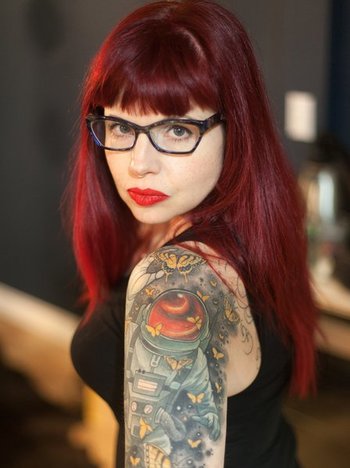 She got her start as an English translator for various manga. She has written various stories for Marvel Comics, DC Comics, Image Comics, Dark Horse Comics, and IDW Publishing. After years of translating manga, DeConnick got her first big assignment writing the 30 Days of Night: Eben & Stella four-issue miniseries in 2006. She then went on to write Captain Marvel for Marvel Comics, which starred Carol Danvers, formerly Ms. Marvel, as the eponymous hero. She was a consultant on and had a cameo in the Marvel Cinematic Universe film adapting her works on Carol, Captain Marvel.

In addition to that, DeConnick also writes Pretty Deadly and Bitch Planet for Image. She's also married to writer Matt Fraction, and they have a son and daughter, if you were curious. She and Fraction have formed their own production company, Milkfed Criminal Masterminds, and have recently signed a production deal with Universal Pictures.

In 2019, she began writing Aquaman and will write Wonder Woman Historia: The Amazons for DC Black Label.