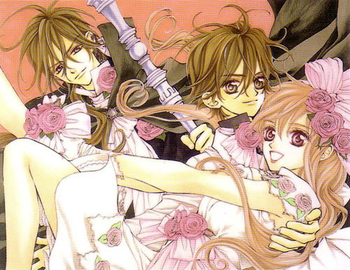 MeruPuri (short for Marchen Prince in the original Japanese release) is a shoujo manga series written by Matsuri Hino, serialized in the magazine LaLa from 2002 to 2004. The series spans four volumes and also has a drama CD. Viz Media has licensed it for an English release.

All high school freshman Airi Hoshina ever wanted was to someday live in a cozy home with a loving husband and find joy in the little things in life. As a result, she makes it her daily mission to get to school on time because school legend has it that the longer one's non-tardy streak is, the better boyfriend one will find. But just when her daily routine is working like clockwork, an occurrence of fairy-tale proportions threatens to disrupt her grand plan.