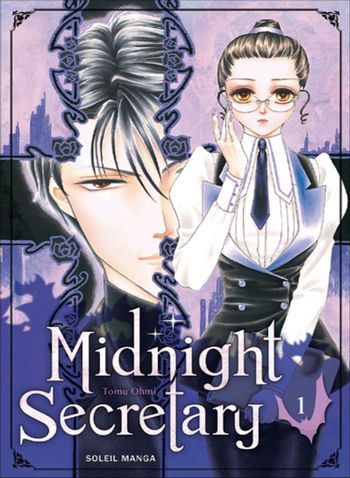 Midnight Secretary is a Josei manga series by Ohmi Tomu, which was serialized in Petit Comic from 2006 to 2009 and compiled into seven volumes. It tells the story of a conservative secretary, Satozuki Kaya, who is appointed as the private secretary of notorious lecher Touma Kyouhei, director of the Touma tableware company.

Staying late at work one night, she accidentally witnesses one of his liaisons and sees him drinking the woman's blood. He taunts her, and she throws herself into organizing his blood drinking: his "meals," including picking out gifts for his women. Eventually (because this is a vampire series and we all know what's coming) Kyouhei drinks Kaya's blood and becomes addicted to it, but struggles with his feelings even as Kaya realizes hers.