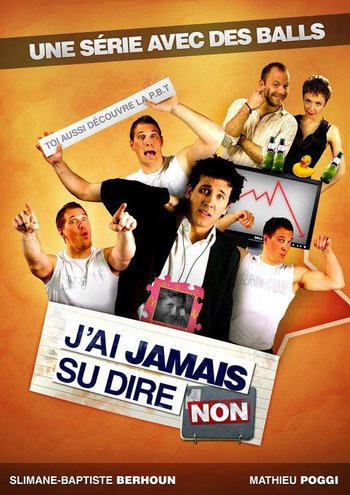 A man's quest to get his girl back as well as his balls.

(I Never Could Answer "No") is a French comedic Web series made by Slimane-Baptiste Berhoun. The series is finished and has 14 episodes.

J'ai jamais su dire non is centered on Tom, an Extreme Doormat, and his friend Mitch. After being left by his girlfriend Emma (after refusing to not sleep with his boss, Roxanne), Tom has to host Mitch. Then Mitch teachs him the "Psycho-Ballsnote as in "testicles"; in French the word can also be used as a slang synonym for "courage" or "self-confidence" Therapy", to make him gain self confidence, and eventually regain Emma's heart. Other important characters are Stan (an hobo usually staying in the park near Tom's flat), Eugène (Emma's new boyfriend), and Chris (Tom's coworker).

The series received two sequels. The first one, La Théorie des Balls ("Balls' Theory"), is mostly focused on Mitch and his theories about balls; it has been released in 2015. The second one, Le Secret des Balls ("Balls' Secret"), deals with Mitch sudden diseappearance the day of his wedding, and the investigation which follows; it has been released in 2016.