Web Video / It's Alive! with Brad 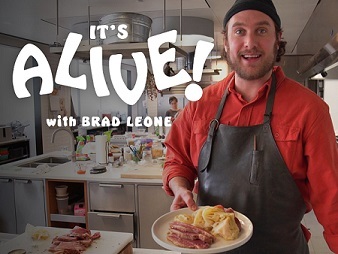 It's Alive! is a New York Cooking Show primarily focused on live foods and fermentation, released as part of Bon Appétit and running since October 2016. It is hosted by Bon Appétit's test kitchen manager (until he started focusing primarily on videos), the upbeat and scatterbrained Brad Leone, with cameraman and video producer Vincent "Vinny/Vin/Vincenzo" Cross and later Matt "Hunzi" Hunziker serving as silent POV, students, and caption snarkers. Matt builds on the silliness with some truly bizarre editing, clipart and visual effects.

The series has gained popularity thanks to the combination of Brad's natural humor and charisma with Vinny and Matt's often silly and surreal production. They have also collaborated with the likes of Sean Evans of Hot Ones and Andrew Rea of Binging with Babish.

A more restrained Spin-Off, It's Alive: Goin' Places, began in early 2019 with Brad and crew visiting various food-related businesses/entities across the country (four episodes in Texas constituted Season 1, four in Hawaii for Season 2, and a two-part Season 3 collaborating with Jimmy DiResta). Vinny left Bon Appetit shortly after, and he's now cameraman and editor for Babish, though he still worked on most of season 3 due to how long episodes take to make. Hunzi then took over on camera.

Not to be confused with the film or the Canadian children's variety show.