The Salesman: Welcome to parrot-dise! 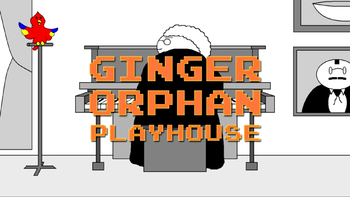 Ginger Orphan Playhouse
A ginger orphan named Cooper meets an elderly shut-in named Madame Trinkett, who invites him into her home. Cooper is then trapped inside her basement where he discovers that the mad elder has also imprisoned several other orphans and a questionably insane vacuum salesman, all of them also being ginger. As Cooper learns to adjust his life to the "playhouse", Cooper learns quite a lot about the history of Madame Trinkett, The Salesman, and even himself, all while trying to somehow escape the basement.