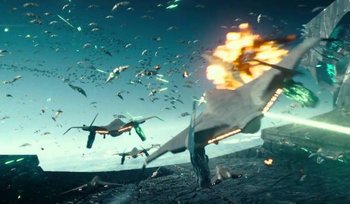 Everyone knows about dog fighting, two fighters desperately trying to bring the other down and fly home in victory. This isn't about that, this about where dozens to hundreds of fighters mix it up in an epic battle, filling the skies with planes in a "furball". Occasionally pops up in other mediums besides air such as under water or in space!

In real life, these started in World War I, where a lot of planes fought each other for the first time. World War II had more of this, but became less common since then with the lack of big wars, sides farther apart in forces and smaller numbers of planes involved.

See also Old-School Dogfight and Standard Starship Scuffle, which generally involve these; Space Fighter, with which the space version of this would be done; The Battlestar, which starts and fights in these; Airborne Aircraft Carrier, which deploys these; and Simulation Game, for the game super-genre that includes the combat flight simulator genre, in which this trope may be the centerpiece of some aerial battles.