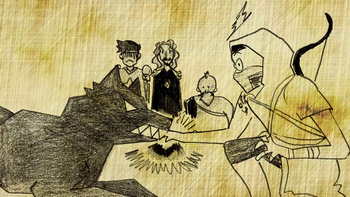 Woman: I'll cover you in gold.
Théo: I am very tall.
Grunlek: No no, I'm smaller, so I'd have less.
B.O.B.: And I'm scrawny, I'd be getting screwed over.
Théo: I'll raise my hands.
Balthazar: Or my staff. (to Grunlek) I'm sure you could use your grappling hook. You say we're incorruptible, it just means we're more expensive.

Mahyar: You ask yourself what could be worse than those... four guards.

Mahyar: So, the old man has introduced himself to… Gaar, how do the Wookiee react?
Seb: I scream at his face.
[…]
Fred: I'm thinking of what to say to him. We're not going to tell him we have been captured by Ewoks.
[…]
Mordeyn: Tell me, why are you here?
Gaar: Because the pilot is bad at his job.
Tyzen: Hey, the pilot saved your lives!
Fred: Tell him we have a princess to rescue, but that she's really ugly.

Apple: I used to be an adventurer... then I tried to heal my knee.
Mordayn: Should we really let her go first like that ?
Gaar: Yeah, sure. She's our infiltration expert, don't worry. And a healer, but you already saw that.

Mahyar: (to Fred) You hear a sound kind of like a train engine.
Krayn: Choo-choo.

Jessica: Nathanael if you don't calm down I'll ram your nose up your skull.

Fred: I didn't plan that you would burn the whole house down.