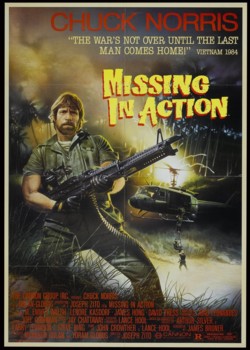 In the decade of action films, the Missing In Action series is a trilogy of action films (one a prequel and the other a sequel of sorts) starring Chuck Norris playing the role of Colonel James Braddock, a Vietnam Veteran.

Not to be confused with Never Found the Body, the actual missing-in-action trope.

You don't need a gun to destroy a TV, just a good karate kick!

Example of:
Shoot the Television

You don't need a gun to destroy a TV, just a good karate kick!