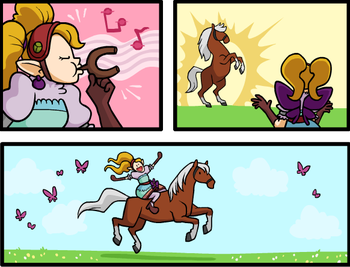 A feature of some Wide-Open Sandbox games (but not exclusive to that genre), which allows you to summon a car/horse/any other means of moving faster than on foot to anywhere on the world map with a few key strokes, regardless where and in what condition you left them before. In some games, the ride exists only as long as needed and disappears into the ether the moment the character dismounts.

Subtrope of Power-Up Mount—in this case, you summon a mount rather than having to first catch it in the wild. Also a subtrope of Easy Logistics. May overlap with Automaton Horses. The ride may be summoned by a Holler Button.

Not to be confused with a Warp Whistle, which doesn't summon means of transportation but transports you where you want to go right away.

Eddie Riggs finds the solo that summons his car.

Eddie Riggs finds the solo that summons his car.