Film / Notes on a Scandal 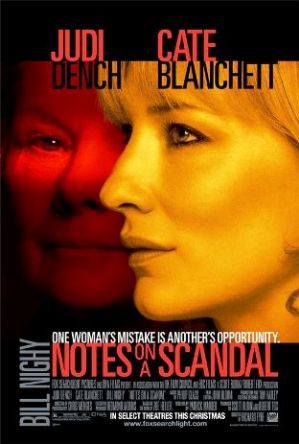 "We are bound by the secrets we share."
"She's the one I have waited for."
— Barbara Covett
Advertisement:

Notes on a Scandal is an intelligent and thought-provoking Yandere/Stalker with a Crush movie, released in 2006 by Fox Searchlight Pictures, written by Patrick Marber and directed by Richard Eyre.

Based on Zoë Heller's bestselling book Notes on a Scandal (released What Was She Thinking?: Notes on a Scandal in the United States), it tells the story of beautiful but lonely art teacher Sheba Hart (played by Cate Blanchett) who begins an affair with a 15-year-old student. However, Sheba's closest friend and confidante, a history teacher and lonely spinster named Barbara Covett (played by Dame Judi Dench) is secretly in love with Sheba and uses her knowledge of the affair to ruthlessly manipulate her. Only Barbara's meticulously kept diary contains the truth of her manipulations. The film also stars Bill Nighy as Sheba's much older husband and Juno Temple as her daughter.

Tropes observed in the movie:

Alternative Title(s): Notes On A Scandal