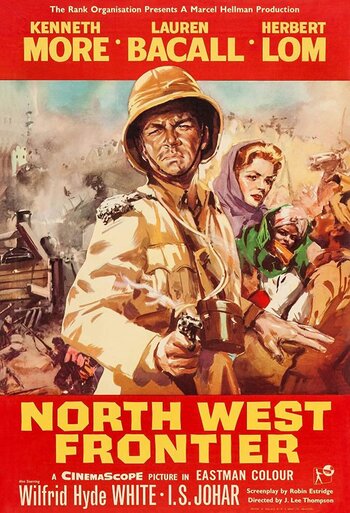 North West Frontier (also known as Flame Over India in the United States and Empress of India in Australia) is a 1959 British adventure film directed by J. Lee Thompson and starring Kenneth More, Lauren Bacall, and Herbert Lom.

The setting is 1905, in the North West Frontier province of India. A Muslim uprising has begun, and British Army Captain Scott (More) is asked to take the 5-year-old Prince Kishan and his widowed governess, Mrs. Wyatt (Bacall), to the safety of Haserabad, and from there to Delhi. However, upon arriving Scott finds that the last train out has already departed, and the rebels have seized the gates.

Undaunted, Scott finds a battered old locomotive called the Empress of India (but always affectionately referred to as "Victoria"note As in Queen Victoria, who adopted the title "Empress of India" in 1876.) and enlists the help of its driver, Gupta (I. S. Johar), to get himself, the Prince, Mrs. Wyatt, and several extra passengers — including Mr. Van Leyden (Lom), a Dutch journalist; Mr. Bridie (Wilfrid Hyde-White), a British ex-pat; Mr. Peters (Eugene Deckers), an arms dealer; Lady Windham (Ursula Jeans), the governor's wife; and two unnamed Indian NCOs — out of Haserabad.