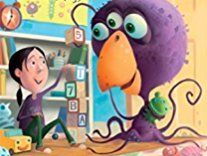 Nelly the Monster Sitter is a children's pentalogy by British author Kes Gray. It follows a girl called Petronella Morton, who places an advertisement in the local newspaper offering monster families a chance to have her babysit their children for the evening. Hilarity Ensues as she learns to understand different monster cultures and the best ways to look after their kids.

Each book features three stories following Nelly's babysitting experiences, as well as her family life. She lives with her snobbish twin sister Astibil, and her supportive parents. Nelly often bickers with Asti, particularly over Asti's prejudices towards Nelly's clients. It often makes their parents' lives harder.