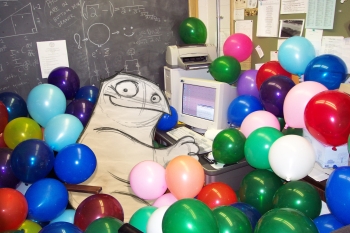 This is Crumlin, a densely populated suburb of Dublin. A community not unlike any other working class area in modern Ireland. But it was here, in 1972, that the first Irish animated baby was born, into an ordinary live action family.
Advertisement:

Badly Drawn Roy is a twenty minute 2006 short film. Set in Dublin, it chronicles the life of Roy O'Brien, a cartoon born into a live-action family. Through interviews with his family and friends, we learn about Roy's birth, childhood, and the rough patches he has hit as an adult. Instead of being a flat-out comedy (though it can be quite funny at times), it uses a Slice of Life approach filmed Mockumentary style. It would eventually become the basis for the CBBC series ROY, a full length television series set during Roy's younger years, also filmed as a Mockumentary. ROY now has a prequel, called Little Roy.

Notably, the film is an entirely Irish production, from the actors to the director to the various groups that commissioned it.

Not to be confused with the Stage Name of British singer/songwriter Damon Michael Gough.

This short film (and the spinoff series) has examples of: