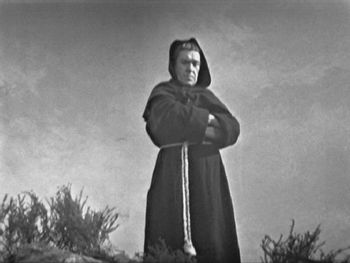 An alliteration advocate, this Meddling Monk appears to be...
"That is the dematerialisation control, and that over yonder is the horizontal hold. Up there is the scanner, those are the doors, that is a chair with a panda on it... Sheer poetry, dear boy! Now please stop bothering me!"
— The Doctor shows Steven around.
Advertisement:

The one where a monk has a record player. And a gun. A big gun.

With Vicki and still-sceptical stowaway Steven in tow, the TARDIS arrives in early 1066 on the eastern coast of England. Exploring, the Doctor finds a wristwatch and a toaster, and is trapped while investigating the sounds of chanting from a ruined monastery. Quite surprisingly, the chanting was a gramophone record.

Turns out that one of the Doctor's (as yet unnamed) own people is here, complete with his own TARDIS — whose chameleon circuit actually works. He plans to defeat Harald Haadrada's Viking fleet with nuclear bazookas, allowing King Harold to win the battle of Hastings, and then help the English accelerate their development so that they have "jet airliners by 1320" and Shakespeare's Hamlet can premiere on TV.

After thwarting his plans, the Doctor removes the Dimensional Control from the eponymous Meddling Monk's TARDIS, shrinking the interior to the same size as the exterior (a sarcophagus) and leaving the monk stranded.

The story has a number of firsts — the first Time Lord other than the Doctor and Susan (though the race is still not named); the first pseudo-historical story mixing real history with sci-fi elements; and of course, the first story without any of the Doctor's original companions. It also has a second, as in the Meddling Monk being the show's second reoccurring enemy after the Daleks.