Literature / Memoirs of an Invisible Man 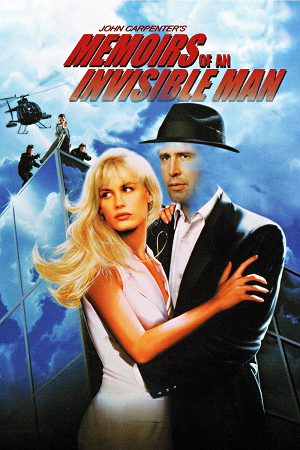 "I want my molecules back!"
— Nick Halloway
Advertisement:

Nick Halloway was a fairly ordinary stock analyst until he fell asleep in the building of Magnascopic Laboratories, a company for which he represented shareholders. That night, a Freak Lab Accident occurs, apparently severely damaging the building; However, no debris is found. It turns out that the accident actually made certain parts of it completely invisible. One of those "parts" is Nick himself.

Desperately hunted by amoral CIA agent David Jenkins, Nick seeks to build a new life while avoiding becoming a scientific guinea pig stuck in a lab until he dies... or is forcibly recruited into being a black ops specialist.

Originally a 1987 Science Fiction novel by H. F. Saint, it was adapted into a 1992 film directed by John Carpenter, and starring Chevy Chase and Daryl Hannah. The book analyzed what effects invisibility would have on an average person who kept his morality, and the movie tried to do the same. The book was a small success; the movie was considerably less well-received.

Tropes used only in the book: