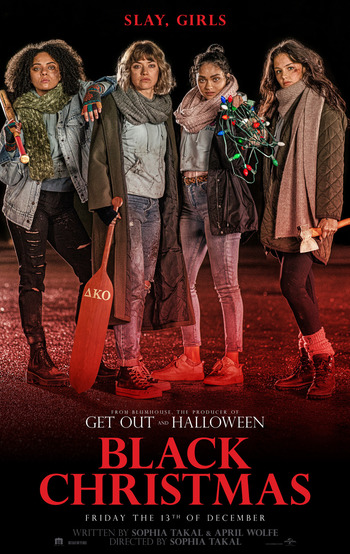 "I will bring you to your knees."
"I’m tired of hiding. I’m tired of running!"
— Riley Stone
Advertisement:

Black Christmas is a 2019 horror flick, and a loose remake of the 1974 original directed by Sophia Takal (Always Shine), written by April Wolfe, and starring Imogen Poots and Cary Elwes.

It's the winter holidays, and on the Hawthorne College campus, a mysterious killer is murdering sorority girls. And when Riley and her sisters come under fire, they have to engage in a fight for survival where finding out who kills and why might be the only hope...

"Ho-ho-ho, bitch. You messed with the wrong sisters."