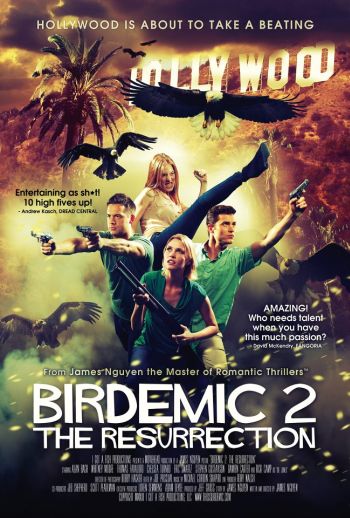 Birdemic 2: The Resurrection is the sequel to James Nguyen's abysmal film, Birdemic: Shock and Terror, a film that is allegedly an homage to Alfred Hitchcock's The Birds. This film focuses on Rod's friend, Bill, who is an indie film director trying to make a film. Bill meets a girl in a restaurant, and he persuades her to audition for the lead role in the film, along with Rod's girlfriend Nathalie, who apparently now wants to be an actress, despite her previously very successful modelling career with Victoria's Secret. Birds then proceed to attack them because of global warming.

Much like the first movie, Birdemic 2 is absolutely terrible. The acting is equally wooden, the special effects are just as dreadful, the camera work is possibly even more abysmal than in the original and the soundtrack is awful. It's a pretty solid entry as a sequel, though the film seems to be a little more aware of what it is.

The cast and director have been touring several cities in America and Europe, showing the film in independent cinemas, but have also made it available for download at the official Web site

if you missed it.

I Hate Everything reviewed