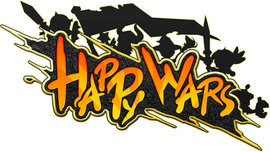 Not pictured: the amount of sheer chaos that can potentially happen in a single match.
Advertisement:

Happy Wars is a free-to-play* (if you had Xbox LIVE Gold membership before Jan. 2014; now it is free to all players sans certain features) online multi-player game by Toylogic and published by Microsoft Game Studios for Xbox 360, Steam,note Discontinued as of February 2017 and Xbox One.

The core gameplay pits two teams of comically-sized combatants to fight their way to the opposing force's castle to destroy the Big Tower inside while protecting their own. Along the way, they must construct towers (which acts as respawn points for the team that captures it) throughout the map to respawn outside the castle area. There are also turrets and other weapons laying around the environment such as bombs or collapsing bridges to hold off the enemy. There are two ways to win a match (or round) of each game: either destroy the opposing team's Big Tower by breaching their castle, or have the most captured towers before time runs out.

Each player starts the match at level one, and by achieving objectives, such as building towers or slaying enemies, they can level-up. Increasing in level unlocks new skills for the characters, including powerful Team Skills which require teammates to join in. After a match, players are rewarded with experience points to raise their ranks as well as Happy Stars to obtain items with in-game currency to upgrade and customize their combatants. Players can purchase high-grade items through the item shop or Happy Cards (basically booster packs of equipment) with Happy Tickets, but they're going cost what you got in your wallet. The game's combatants consist of three character classes with future updates to add sub-classes to the primary three. They are as follows:

The game features a single player story campaign, as well as competetive and cooperative multiplayer. The game was released on Xbox Live Arcade on October 12, 2012 for the 360, and April 24, 2015 for the Xbox One.

This games features trope examples of: