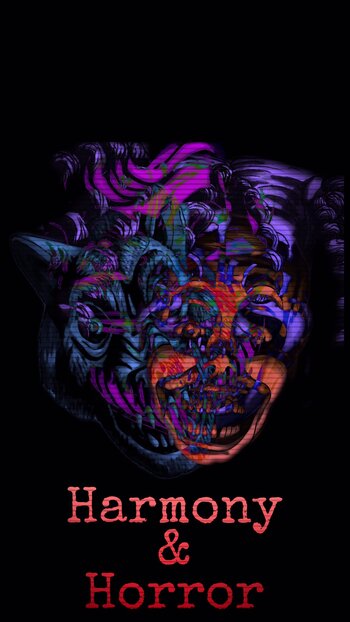 The Show Must Go On.
Advertisement:

Harmony & Horror is an Analog Horror YouTube series made by Battington

. Similar to channels like Squimpus McGrimpus and The Walten Files, it's inspired by Five Nights at Freddy's, however it narrates a completely original story that revolves around a toy company called M&A Harmony Toys and the murders committed by one of its founders, Martin Greywhinder.

The first season ended on October 23, 2020 with a Grand Finale that wraps some of the plot points of the season and hints for a second one. A non-serial Christmas Special called "My Two Front Teeth" was released on December 22, 2020, showing us an In-Universe TV special made by M&A Harmony Toys.

On February 1st, 2021, during the "100,000 Special", alongside the revelation that he opened an official Teespring

Currently, Battington is also helping with the production of a Five Nights At Freddy's fangame codenamed Little Kid and Snake, producing a series of six animated teasers, the first of which can be seen here

Harmony And Horror contains examples of: