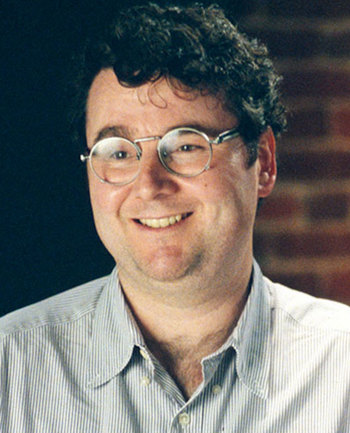 Joseph Henry Ranft (March 13, 1960 — August 16, 2005) was a beloved god of animation, Pixarian, Disney animator and writer, magician, impressionist, actor, and prankster extraordinaire. He was a classic example of a maladjusted child with a dark imagination finding great success in the film industry. A famous example of "a genius that died long before their time," he is the subject of many a tribute and dedication, even a non-fiction book. Perhaps best remembered by those who knew him for his kindness, generosity, positivity, sense of humor, and his fatherly mentoring ability. To those who didn't know him, he is most famous for his many voice roles; Lenny and Wheezy in the Toy Story series, Heimlich the caterpillar in A Bug's Life, Jaques the shrimp in Finding Nemo, amongst many others. He worked on some of the most beloved animated films of the past thirty years including The Little Mermaid, Beauty and the Beast, The Brave Little Toaster, The Lion King, Toy Story and Toy Story 2, A Bug's Life, Monsters, Inc., Finding Nemo and Cars.

On August 16, 2005, Ranft and his friend Eric Frierson were passengers in Ranft's 2004 Honda Element, which was being driven by another friend, Elegba Earl. Earl suddenly lost control and crashed through the guard rail while northbound on Highway 1. The car plunged 130 feet into the mouth of the Navarro River in Mendocino County, California. Both Ranft and Earl were killed instantly while Frierson survived by escaping through the sun roof, though he received moderate injuries. Ranft is survived by his wife Sue Barry and their kids Jordy and Sophia, and his brother (and Pixar sculptor) Jerome.

Tropes in the work of Joe Ranft: