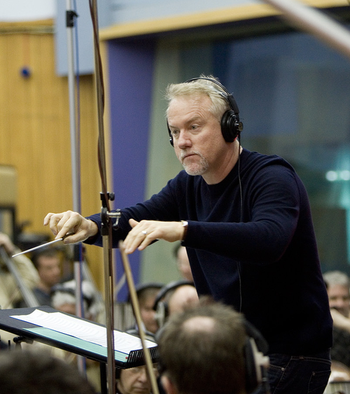 John Cardon Debney (born August 18, 1956) is an American film, television and video game composer born in Glendale, California. A protege of both Disney composer Buddy Baker and television composer Mike Post, Debney began his career doing music for rides at Disneyland and Walt Disney World. After leaving Disney, Debney went into television (scoring for shows ranging from Star Trek: The Next Generationnote and Star Trek: Deep Space Nine to much of the Hanna-Barbera output). While serving as a composer for Hanna-Barbera, he did his first major film Jetsons: The Movie (having previously done the likes of Seven Hours To Judgment and The Further Adventures Of Tennessee Buck). He went into film full-time after James Horner recommended him to score Hocus Pocus three years later and got his big break when he replaced David Arnold on 1995's Cutthroat Island (Debney is just about the only person involved with this film whose career didn't take a body blow as a result).
Advertisement:

Steadily working since then, he has tackled multiple genres and is known to adapt to any style given to him. He also mentored director Robert Rodriguez on scoring and has collaborated with him on a few scores. Debney has received an Oscar nomination for The Passion of the Christ and won three Emmys, for The Cape (not this one), seaQuest DSV and The Young Riders. He is currently one of the composers working on The Orville.

Debney also has the distinction of having written music for Star Trek, Doctor Who, DC (he scored the ill-fated Justice League of America pilot) and Marvel (Iron Man 2)!

Among the films scored by Debney:

Debney has also written the themes for the following TV shows: