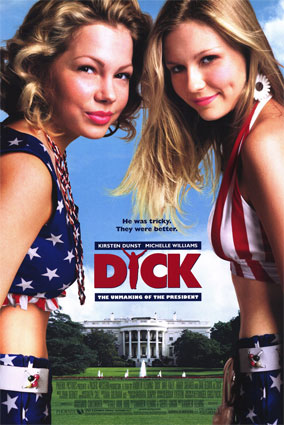 A 1999 comedy film, directed by Andrew Fleming and starring Kirsten Dunst, Michelle Williams, and Dan Hedaya, about a pair of teenage girls bringing about the fall of President Richard Nixon (yes, that's who the title refers to; get your mind out of the gutter).

Betsy (Dunst) and Arlene (Williams) are kind-hearted but not overly bright best friends who, while sneaking out late at night to mail an entry to a "meet Bobby Sherman" contest, inadvertently cause the Watergate break-in to be discovered. Later, on a school trip to the White House, they are recognized and spirited away to be interrogated, which indirectly results in them meeting President Nixon (Hedaya) face to face. Nixon, recognizing their lack of interest in politics of any kind along with their great interest in petting his dog Checkers, buys their silence by naming them the "official White House dog walkers", meaning that they are present for all the major moments of Nixon's presidency.