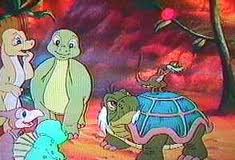 One of the 1980s cartoon series that no one seems to remember, Dink the Little Dinosaur is the story of a young Apatosaurus named Dink and his friends Amber (a Corythosaurus), Scat (a Compsognathus... maybe), Shyler (an Edaphosaurus), and Flapper (a Pteranodon), who live in the peaceful Mesozoic paradise of Green Meadow and learn important life lessons from an old turtle — with hair — named Crusty. The series depicts the characters' childhood shenanigans and their scuffles with the evil carnivore Tyrannor.