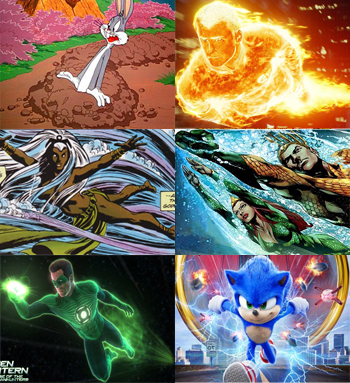 Examples and subtypes include:

In addition to the above types, there are many ways that Metal, sound and gravity can be used to convey speed, but these tend to be associated with other elements, such as electronics, thunder or darkness. Unless the work in question treats any of those things as an "element" in their own right, they don't count.

Sub-Trope and combinatin of Super Speed, Elements of Nature and Elemental Powers.

As explained above, some of the sources of this trope are Older Than Dirt.

Note: To qualify as an example, the element in question needs to be the source, means or visual indication of a character's speed. For instance, merely riding a Jet Pack is not enough—the flames of the jets need to convey velocity.