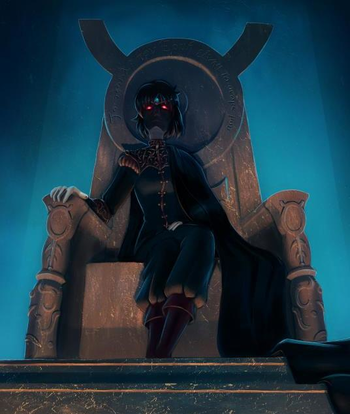 The story's hero of Love and Justice, no, really.note Image

.
Ami's eyebrows shot up as everyone kept staring at her with bated breath. "What?" she asked into the silence, crossing her arms in front of her chest defensively.
"Aren't- Aren't you going to convince them by revealing your grotesque and horrifying true form now?" Snyder asked, a hint of disappointment quivering in his voice.
The three goblin heads peering around the door frame nodded. "Yes. Is traditional."
Ami blinked at the expectant expressions surrounding her, then closed her mouth with an audible snap. She turned her head and threw a pleading look at the Reaper, who just snickered at her predicament. "But I'm human! I really look like this!" — Chapter 20: Strategy Meeting

is an ongoing Crossover fanfiction written by Pusakuronu. It begins with Ami Mizuno being transported to the world of Adushul and forced to become a Dungeon Keeper herself. Armed with nothing but her smarts, a couple of imps, and a Horned Reaper who hates her guts, the now Keeper Mercury will have to face both the forces of evil Keepers who want to stop her, as well as the heroes who refuse to believe her good intentions, all while trying to find a way to get back home.

Since Anime Addventure is now defunct, the chapters are now hosted at Sufficient Velocity (full story plus discussion

The crossover uses the anime continuity of Sailor Moon, only applying bits from other continuities if absolutely necessary. It also acknowledges the events of the first Dungeon Keeper game.

The story proper can be divided into several main arcs that are largely self-contained, plot-wise, but which connect the larger, overarching story.

Plot summary (with spoilers), is listed on the recap page.

You can download all the current chapters in a single document in the following formats: epub

(up-to-date as of 2018-07-24note scrapped from Sufficient Velocity with FanFicFare, includes fanart cover

. You can create the other formats from that one with Calibre. You can also read it in a single page by visiting the Lysator page

compiled by Thomas Bellman and up to date as of August 2021.

Now has its own wiki