This page contains unmarked spoilers for Danganronpa and Yu-Gi-Oh!. You Have Been Warned! 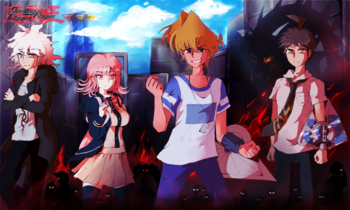 A battle of hope and despair. With card games. Art by Starcoookies

.
What do you know about Duel Monsters?
— Junko Enoshima
Advertisement:

Worlds collide as a twisted tale interlocking the fates of both universes begins. Dueling Trigger Finger

is a fanfiction created by draconichero21 that combines both the Danganronpa and the Yu-Gi-Oh! universe and starts at the beginning of Battle City. For the Danganronpa cast, it starts in between episodes 2 and 3 of Danganronpa 3 Despair Side. And in spite of this, even class 78 shows up, though, of course, they're not in Hope's Peak yet.

Although the series is currently doing arcs for the Yu-Gi-Oh! series, there are plans to continue straight into the continuity of Danganronpa, including the killing game and all machinations thereof.

A prologue was posted to his DeviantArt account seen here

. It follows someone that's clearly not Makoto through the first portion of Danganronpa: Trigger Happy Havoc, only to reveal their identity at the end. According to draconichero the prologue does constitute the canon setup for the fic, which have already changed elements of Danganronpa's canon.

Like Fairy Without Wings, Dueling Trigger Finger does a surprisingly good job of meshing both worlds together. And, as always, draconichero's talent for character interaction is on full display.