Fanfic / A Game Comes to Equestria 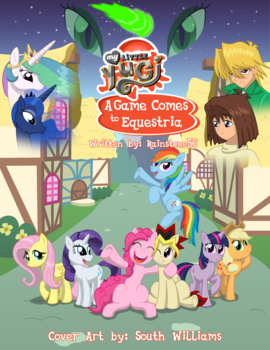 "Wishes can change everything."

A Game Comes to Equestria (or A.G.C.T.E for short), is a crossover fanfic of My Little Pony: Friendship Is Magic and the first Yu-Gi-Oh! series written by Rainstone56 on Fanfiction.net.

When an unplanned meteor shower happens in Equestria, everypony in Ponyville goes to see it, including Pinkie Pie, who wants to make a wish on the strange "green" shooting stars that appear now and then. Her wish? To meet a new pony she has never met before; somepony completely brand new to be friends with. She gets her wish.

Meanwhile in a world different and separate from Equestria, Yami's duel with Raphael

has reached its end, with The Seal Of Orichalcos preparing to take his soul. However, at the last minute, Yugi swaps places and is taken in Yami's place instead, ending up as (soul) food for the Great Leviathan...

Had it not been for one tiny little problem: at the moment of transfer, something had interfered with the Orichalcos' magic, and instead of going to Dartz, Yugi ends up crash landing in Ponyville, transformed into a Pegasus.

The good news? He's mostly unharmed. The bad news? Yugi remembers nothing about his own past before coming to Ponyville save for his own name. Pretty soon, his presence in Equestria opens up an old lock of its past, starting a new adventure and revealing secrets about the Elements of Harmony and much, much more.

The events of the story take place during and in between Seasons 2 and 3 (for the Friendship is Magic side) and during the DOMA/Waking The Dragons arc.

, and, for now, its on Hiatus. When completed, it will also be available on DeviantArt and Fimfiction.net. There is also a collection of theorems, bios and one-shots called ''The Game's Collection'', which can be found here.