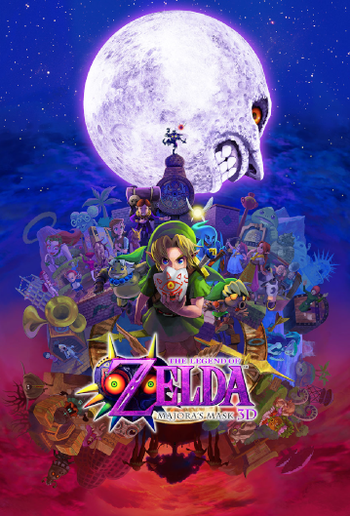 Saving the world, three days at a time.
Dawn of the First Day

Majora's Mask is the sixth game in The Legend of Zelda series, released in 2000. A followup to Ocarina of Time in terms of both story and gameplay, the development team re-used the engine and character models from Ocarina of Time, which reduced the development time of this game to one year. Fitting, as the devs only had that one year to make it, owing to a bet Eiji Aonuma made with series creator Shigeru Miyamoto. The game was notable both for being the darkest entry in the series at the time, a title that it's still in the running for to this day, and for being one of two games that required the N64 Expansion Pack alongside Donkey Kong 64 (though technically Perfect Dark needed it as well in order to function properly).

In the wake of the success of its predecessor's 3D Video Game Remake, Majora's Mask also received a remake for the Nintendo 3DS; it was developed by Grezzo in conjunction with Nintendo.The N64 original has also been rereleased on the Virtual Console for Wii and Wii U, as well as Nintendo 64 - Nintendo Switch Online on Nintendo Switch.

— 48 Hours Remain —
D
creatures have in their respective games' Japanese version, confirming they're the same species.
E
F
Dawn of The Final Day