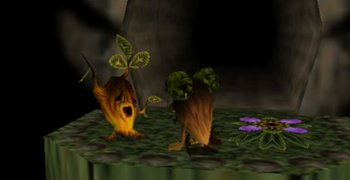 Link saved Termina, but he couldn't save everyone...
Forgive... your... friend...
Advertisement:

Thanks to its bleaker tone, Majora's Mask is arguably one of the saddest entries in the Zelda franchise. So don't be surprised if this game tugs at the heartstrings.

open/close all folders
Game
Other