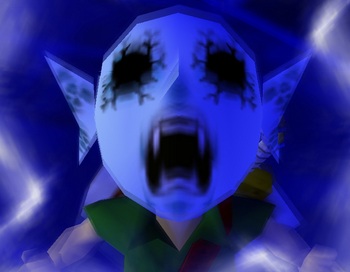 The iconic transformation sequence from the hit motion picture "A Hyrulian Were-Zora in Termina".
Advertisement:

The Zelda series has its share of Nightmare Fuel, but Majora's Mask is the most infamous for it. There's a reason this game is considered the darkest in the Zelda series — many reasons, in fact:

open/close all folders
The Start
The Skull Kid
The Happy Mask Salesman
The Happy Mask Salesman may be on Link's side, but he's still one of the creepiest characters in the game. Suddenly appears out of nowhere at the start of the game? Eerily complete knowledge of the way the Artifact of Doom was made and works? Near-constant creepy-ass smile and one of the most sinister laughs one has ever heard? Switching from emotion to emotion, going from jubilant to furiously screaming in your face in half a second? One of the creepiest moments was when you failed to get Majora's Mask back the first time. "Don't tell me... My mask... you did... get it back... Didn't you?" His eyes open, filled with rage. Cut to him shaking Link like a rag doll, screaming "What have you done to me!!!" as a deranged version of the Song of Healing plays in the background.
Advertisement:
Masks
Majora's Mask
The Moon
And of course, who can forget the Moon that just sits in the sky with its horrible orange eyes and massive gaping mouth that never moves? And it never goes away, you can look up at it anytime. And it gets bigger and bigger with each passing day until it's taking up the entire sky with its angry grin. And during the third day? You can actually watch it inch ever closer in real time, slowly descending to the earth. Tremors will preiodically rock the earth as it does.
Clock Town
Romani Ranch
Advertisement:
Southern Swamp
Snowhead
Great Bay
Ikana Canyon
The Ancient Kingdom of Ikana, land of the dead. To wander into Ikana is to throw away your life in reckless abandon. Its background music

speaks for itself. Walking into Ikana shifts the game full-tilt. Whereas the other areas all seemed relatively normal locales twisted by evil, there is something deeply wrong with this area that extends far beyond the petty tricks of a masked imp.And this is all before you get to the valley proper.
Miscellaneous
Go to the lair of the temple's boss?
Yes / No