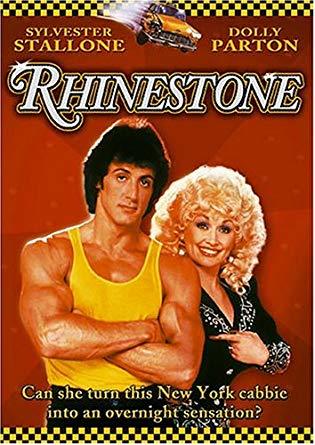 Rhinestone is a 1984 American musical comedy film directed by Bob Clark from a screenplay by Sylvester Stallone and Phil Alden Robinson and starring Stallone and Dolly Parton. A critical and commercial flop, Rhinestone is generally regarded as So Bad, It's Horrible.

Jake Farris (Dolly Parton), a country singer stuck in a long-term contract performing at "The Rhinestone", a sleazy urban cowboy nightclub in New York City, boasts to the club's manager, Freddie (Ron Leibman), that she can make anybody into a country sensation, insisting that she can turn any normal guy into a country singer in just two weeks. Freddie accepts Jake's bet, putting up the remainder of Jake's contract (if she wins the bet, the contract becomes void; if she loses, another five years will be added). He then ups the ante: if Jake loses, she must also sleep with him.

The problem is that Freddie can select the man, and he selects an obnoxious New York cabbie named Nick Martinelli (Sylvester Stallone). Nick not only has no musical talent whatsoever, he claims to hate country music "worse than liver". Realizing she is stuck with Nick, she takes him back to her home in Tennessee to teach him how to walk, talk and behave like a real Country star. While there, he has to put up with Jake's constant nagging and berating him about his behavior, the culture-shock of not knowing anything about the South, and Jake's ex-fiancée Barnett Kale who befriends Nick, then turns on him when he realizes that he and Jake have developed feelings for one another.