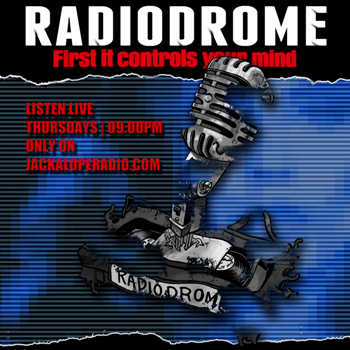 Radiodrome is an Internet radio podcast series, presented by Josh Hadley and other guests. The show mainly discusses popular culture, namely films and TV series, usually of in the Exploitation Film genre. Sometimes it's semi documentary in its nature (the episodes about Video Nasties, 35mm film, Tony Scott, Joe Dante, John Carpenter, Oliver Stone, the rise and fall of video stores, ...), others times it's mainly discussing different opinions about various topics. The show's host Josh Hadley has both his fans and his detractors, who either find him too biased or just very opinionated.

Radiodrome was also well known to fans of The Cinema Snob, because Brad Jones used to be a regular guest on the show, along with friends of his, including Alex Jowski, aka the Marquis de Suede. On November 5th, 2013, Brad Jones announced his departure from the show. In his own words (posted on his Facebook profile): "There's no drama involved or anything like that, it was just time for me to move on." Since then Josh has continued making episodes, usually with Cecil Trachenberg of Good Bad Flicks.

joined to the show as the third regular member.

The show can be listened to on Jackalope Radio Thursday nights at 9 PM CST / 10 PM CST, but is also available on RT Gomer Productions, and The Cinema Snob site.