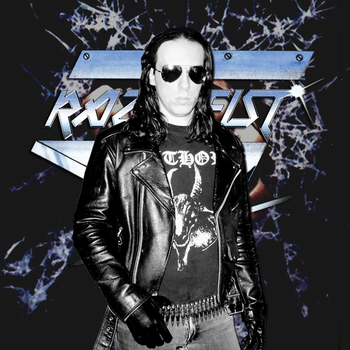 The Rageaholic is a review series from YouTube user RazörFist. His series is known for his witty fast talking nature, large vocabulary paired with a never-ending deluge of swear words, using pictures along with his rants to accentuate the comedy, and his mostly his contrarian and opinionated nature. His biggest comedic influence is Dennis Miller, which makes sense since Razör's comedy style is all about using similes and metaphors with pop culture references.

Not only does he review video games, he also does movie reviews under the Rageaholic Cinema banner. Lately, he started his second most popular types of videos where he does music review episodes called Music Mythos. This is where he reviews a band's entire discography in one video. For these episodes, the bands featured are usually under the Heavy Metal genre (thus these episodes are called Metal Mythos) although he has reviewed non-metal artists like Michael Jackson and Queen. He also reviews comics (Razör v. Comics), does rants, and has a Let's Play series called RazörFist Arcade where he and his editor Terran Gell usually play through the demo of an up and coming game release. He makes a wrestling rant show called The Razör's Edge and the videos have been featured on Vince Russo's YouTube channel. Lastly, he does rant videos where he discusses his opinions on various current topics, particularly involving social and political issues both in the United States and abroad.