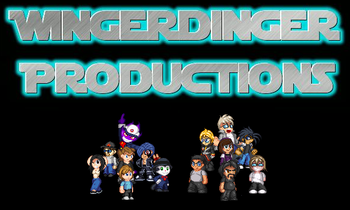 WingerDinger logo, with sprite versions of the group.
Advertisement:

WingerDinger Productions was a group of video makers consisting mostly of former YouTube members who got false DMCAs and left, formed more or less by the late, great Hellsing920 (or Emer, if you prefer). Like That Guy with the Glasses, arguably speaking, they provided the standard garden variety of videos consisting of reviews, rants, commentaries, you name it. They also had an ongoing webcomic series illustrated by RandomDCE.

After a few months, the website was hacked. Since then, most of the contributors have moved on with their lives with few continuing to use the WingerDinger name in their videos.