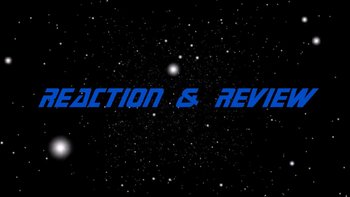 Honest Reviews. No Bullshit.
"I am just going to give you a quick little run-down as to how this series works: I have found a movie that I have never seen before, and I'm going to watch it for the first time ever, and I'm going to record my reactions to it. I am, naturally, going to edit this down, because it'd be really boring to just watch me watching something for [over an hour] [...] but, once I actually am done reacting to it, and once I've finished watching it, I'm then going to give an instant review based on what I just saw."
— Emer summing up the basis of this series; from the Violent Shit review
Advertisement:

Welcome, ladies and gentlemen, to the Reaction & Review page on TV Tropes!

Web series from Emer "Hellsing920" Prevost (most people either called him Emer or Hellsing), a self-proclaimed "D-List Internet Celebrity", where he watched movies for the first time. First, you saw him react to it, then he reviewed it.

The origin of this series is somewhat interesting. During an episode of Sunday Night Live (a live streaming show that Emer and a few others used to do), there was a scheduled live commentary of Kickassia. However, due to technical difficulties (and a general hatred for what they were watching), the commentary had to be scrapped a few minutes into the movie. Shortly afterwards, Emer (who was experiencing the technical problems) announced during the show that he would make a video reacting to and reviewing Kickassia. The rest is history.

It should be noted that in this series, almost no movie was off-limits. The only piece of criteria that Emer had set was that they had to be movies that he hadn't seen. This was to ensure genuine reactions during the Reaction portion of the videos and a mostly-unbiased review for the Review portion. However, he was not above driving the Bias Steamroller if the movie featured an actor he disliked (most of the cast of Kickassia) or if he genuinely dreaded watching the movie (Mr. Wrong). The series had generated some amount of fame since then.

On August 6, 2017, Emer passed away at the age of 34 due to a combination of sepsis and a hernia he had been suffering from, a week after uploading his last video, a stream of Resident Evil 7: Biohazard. This was announced by his brother, Martin, on Facebook. May he rest in peace.

You can check it out by going to Season 1

So without further ado, it's time to kick back, relax, and check out the tropes:

And, with that, we come to the close of the "Reaction & Review" TV Tropes page. Until next time, ladies and gentlemen, take care, and I will see you all in the near future. Peace.