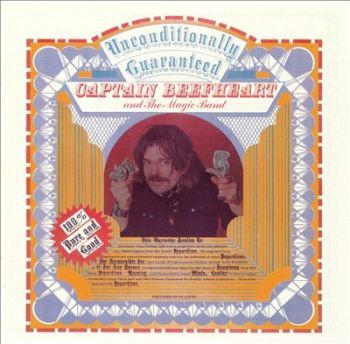 Unconditionally Guaranteed is a 1974 album by Captain Beefheart, which provided a Lighter and Softer sound than his usual Avant-garde Music exploits. Beefheart hoped that this would improve his poor sales. Unfortunately the record proved to be the low point of his entire career. His band members were so horrified when they heard the slick Rock sound with its uninspired lyrics that they all quit. They too were desperate for success, but this total Sell-Out was not something they wished to be associated with. To make matters worse Unconditionally Guaranteed failed to become a bestseller, was destroyed by critics and even alienated his loyal fans. Together with Bluejeans & Moonbeams (1974) its generally seen as Beefheart's weakest album and many Beefheart afficionados ignore both albums ever happened. Even Beefheart himself would later perceive both records as an Old Shame and advised everybody who bought them to go to the store and ask for their money back.

Despite bad reviews most listeners will probably have the opinion it is rather So Okay, It's Average than truly awful.