Music / Lick My Decals Off, Baby 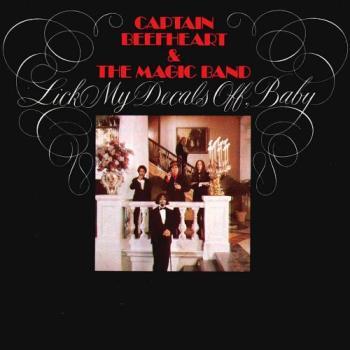 Lick My Decals Off, Baby is a 1970 album by Captain Beefheart. It appeared right after Trout Mask Replica had given the artist a strong underground reputation and many fans consider it one of his best albums, along with Safe as Milk, Trout Mask Replica, Clear Spot and Doc at the Radar Station. Some even argue it being better than "Trout Mask Replica" because it has less Album Filler. Thanks to British radio DJ John Peel's frequent airplay the album sold exceptionally well in the United Kingdom, even peaking at number 20 in the UK Albums chart.

Yet despite the positive reviews the album has been out of print for many decades, only having a minimal release on CD and thus, as a result, it is highly sought after by fans. In a case of Keep Circulating the Tapes old LP's, CD's and bootlegs have been sold and re-sold by fans until, finally, in 2014 the album was made available again, albeit as part of the box set "Sun Zoom Spark", which also forces fans to rebuy "The Spotlight Kid" and "Clear Spot" again if they already owned that one. Though, as a special collector's item, the box set also features a fourth disc with outtakes and alternate versions.

The album is also known for a surreal Le Film Artistique promotional video which didn't get much airplay, but is nowadays put on display in the Museum of Modern Art.