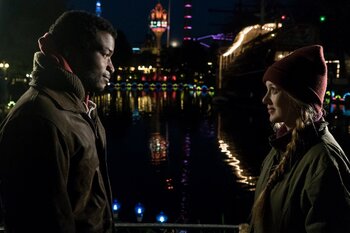 Silent Nights is a 2016 short film (30 minutes) from Denmark, directed by Aske Bang.

It's a love story between an idealistic Danish woman and an undocumented Ghanaian immigrant. Kwame is the immigrant, who entered Denmark illegally to earn money for his family, but has failed to do so, and has been reduced to sleeping in the streets. That's how he first meets Inger, the Danish woman who volunteers at a Salvation Army shelter.

Inger befriends Kwame after coming to his rescue when three men were beating him up in the park for no particular reason. She gets him a job helping out at the shelter, and soon, they are lovers; he does not mention his wife and three children back in Ghana. Further complications ensue, like one of Kwame's children falling seriously ill, and the presence of Inger's racist drunk of a mother.